[Two ABC executives, Exec 1 and Exec 2, sit in an office at headquarters in the Upper West Side]

Exec 1: “How are we going to fill the Reality Show Tuesday 7pm slot?”

Exec 2: “Gahhh! Do we really have to decide that today?”

Exec 2: “OoOoOoOooooooOOo. Can we sit with the Green Team this time?”

Exec 1: [Interrupting] “But we gotta finish this first.”

Exec 1: “Ok here’s Option 1. ‘Female Prison Beauty Pageant: Inmates compete for freedom in this weekly competition where they will be judged on their abilities to make prison wine, barter for cigarettes, and of course, spontaneously weave a nightgown out of jumpsuits and bedsheets.” 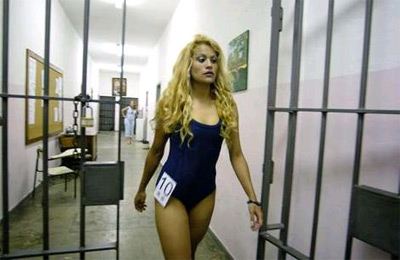 Exec 1: “Option 2. ‘Adoption Island: Kid-hungry couples square off against each other to see who would get the right to adopt their own little orphan.’”

Exec 1: “That’s a possibility! Option 3.: ‘Reverse Pimp My Ride: Contestants compete in a trivia quiz to win their favorite celebrity’s car. If the final contestant answers all the questions correctly, he/she wins the car. If the answer is wrong a 50-ton weight destroys the car.’”

Exec 2: “Nah. Now that I think about it. All of these options are great, but they sound like too much effort. Isn’t there something cheaper and easier to produce that we can force feed our viewers?”

Exec 2: “Right. The Olympics were last Summer. I’m sure we can find a medalist in some obscure sport… Say, diving. Yeah, diving! He can judge a celebrity diving competition. We’ll take a bunch of b-list celebrities fighting to stay relevant and let them belly flop from high platforms — and one of them has to be really really fat!!! The show could be called Splash!, yes, with an exclamation mark! Of course, only 4 minutes out of the hour would contain actual diving, so we’ll fill the rest up with ‘compelling’ personal stories.”

Exec 1: “But wait. Didn’t a show by the same name concept get cancelled a few years back.”