May of last year, AT&T was battling the FCC to allow the pending T-Mobile merger. At the time, AT&T said it was very unlikely to expand 4G beyond 80% of the United States. AT&T claimed that they didn’t have enough spectrum without T-Mobile to provide 4G to the less populated areas of the United States.

The FCC denied their request for merger, claiming that AT&T was going to expand its 4G networks to 97%, regardless of what resulted from the proposed merger. AT&T blasted this claim as pure speculation. 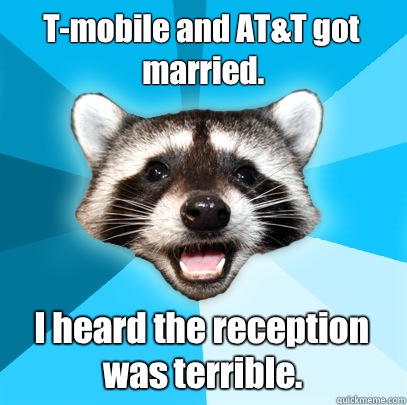 “So terrible, it didn’t last.”

About a year later, yesterday to be exact, AT&T (you know, without T-Mobile) announced a plan to invest $14 billion in infrastructure to cover 96% of the population with 4G by 2014. Hmm…

“That poor-mouth 80% statement was about as credible as AT&T’s claim that the merger would create 96,000 jobs,” said former AT&T executive Josh King.

Initially intending a two word written statement — “Boo-ya, AT&T!” — FCC instead responded to AT&T’s announcement, stating that it is “proof positive that the climate for investment and innovation in the U.S. communications sector is healthy.”

It’s good that AT&T announced 96% coverage instead of 97%. At least now they can blame the that missing 1% on not being allowed to merge with T-Mobile.